Read it all here. Click on Read our author's stories. Let's say we now learn more about Sirius' motorcyle. The story was sold at auction yesterday for $48,855.

Question: Who were the ones on broomsticks?
Owl Post from Unknown at 7:10 AM No comments: Links to this post

Could the "prequal" be one of Filch's Detention Reports? 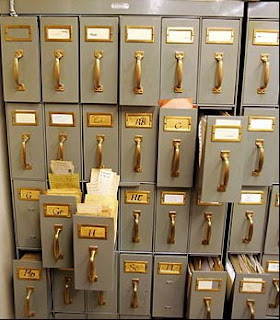 Time out for some Potter. As some of you may know (and for those who don't but wish you did - you know who you are), J.K. Rowling has penned an 800 word "prequel" for a charity book auction in the U.K. It is one of 13 story outlines written by famous writers for a charity auction to be held by Waterstones on June 10. She was given a note card to write her submission and we have learned that she took up both sides of the notecard to pen a short story about Harry's father, James Potter and Sirius Black, Harry's godfather, that takes place about three years before Harry is born.

So naturally, the Potter world is full of speculation. We haven't heard our theory yet - so we thought, for the fun of it, we'd offer our thoughts. So here comes another "Official ZoeRose Theory" brought to you by Madam Rosmerta's Butterbeer: The best butterbeer in Hogsmeade.

Harry was born in 1980. So that would put the year of this event as 1977. We believe that James and Sirus were born in 1960. That means that they "come of age" in the wizarding world at age 17, which would be 1977. That mean that they can do magic without penalty since they are no longer "under age." It also means that they are probably in their 7th year at Hogwarts.

So - here's the Official ZoeRose Theory: In the sixth book, Harry Potter and the Half Blood Prince, Harry is given detention by the potions professor Severus Snape after Harry uses a forbidden dark arts spell against his nemesis Draco Malfoy. Harry's detention is to take a particular cards from the file of the official Hogwarts caretaker, Argus Filch, and recopy them by hand. The card files kept by Filch are reports where he tracks all the infractions of Hogwarts students put in detention over the years. The particular card file that Prof. Snape orders Harry to recopy is the massive file of James Potter.

It is a great undertaking and Harry's detention is to last weeks, he is suspended from his Quidditch team, of which he is the captain, and instead must spend hours copying all the old detention files of his father during his years as a Hogwarts student.