pottercast- Broadcast your self LIVE
Owl Post from Unknown at 8:56 PM No comments: Links to this post

The best of all worlds: The Harry Potter Lexicon will be published - finally - next month

All four hundred and something pages.

We're thrilled for Steve, who has been caught in the crossfire between his publisher and Warner Brothers lawyers. Warner Brothers and J.K. Rowling's lawyers sued the publisher, RDR Books, over the publishing of the Harry Potter Lexicon, an encyclopedia - published for years online by Steve Vander Ark and even used by J.K. Rowling, as she has said publicly, while writing her own books (and, in happier and less litigious days, awarded Steve Vander Ark her one of her first fan site awards after the launch of JKRowling.com, her official website).

When it went to book form, the lawsuits started flying and war broke amongst HP fans to rival any sort of war we might see - or not see - in the wizarding world. It's not been pretty. While Warner Brothers was not successful in its pursuit of a more rigid restriction of commentary using an argument for the protection intellectual property (i.e., increasing the scope of trademark law to include not only particular images, but also particular words "invented" by J.K. Rowling), as well as challenging the publication of works that have been long online when they went into print, it was successful in putting a red light on the publication of the original text of the Lexicon for the print version (but not the online version). However, the judge gave a green light to RDR books that if revisions were made, the Lexicon could be published.

Those changes are now completed (and it looks like from initial reports for the better) and a green light from J.K. Rowling's lawyers has been granted, we can expect to see the newly revised Harry Potter Lexicon in January. We raise our glasses of Butterbeer in honor of Steve's work, a celebration of J.K. Rowling's amazing achievement, and look forward to getting our own copy next month.

The best of all worlds.

The Harry Potter Lexicon will be released on January 12th 2009.

Here's more on the story:

We think it's a better book in many ways because it has a lot more analysis," said Roger D. Rapaport of Muskegon, whose RDR Books is publishing The Lexicon. "He's done an amazing amount of new work."

Rapaport, Vander Ark and their team of lawyers -- including Craig Monette of Muskegon -- are confident this version of The Lexicon will pass legal muster. (The cover was negotiated by both sides to avoid a separate planned trademark lawsuit.) The book is set to be released on Jan. 12 in the United States and England.

For $24.95, readers can get a treasure trove of background information about the Harry Potter series that Vander Ark, who calls himself "just a librarian," culled through years of research. They'll get not only an index of characters, but background on them, the reasons behind their names, the folklore and mythology behind the creatures they encounter and much more.

"There's so much depth to her writing," Vander Ark said. "It makes a book like 'The Lexicon' enhance her work."

A fan of the Harry Potter series, which he has read dozens of times, Vander Ark said he doesn't give away any of the plots, but entices readers to re-read the books for more meaning and to make connections they may have missed.

He said it will be especially appealing to Harry Potter fans who have read the series and "who have a sense there's so much more there."

He culled information from interviews and articles Rowling has written as well as a great deal of "literary detective" work.

In suing RDR Books over "The Lexicon," Rowling claimed it took away from her own plans to write a reference guide to her series. But the judge, in the first-ever opinion on the legality of reference books based on other literary works, said there was nothing inherently wrong with writing "The Lexicon," Rapaport said.

But he ruled against RDR Books because Vander Ark had used descriptions and wording too close to Rowling's and inappropriately used material from two guide books she had written about the series.

Using the judge's very detailed, 68-page ruling, Vander Ark said he was able to rewrite his book to comply with the law. The ruling by the judge served not only as a "rule book" for Vander Ark, but any author looking to compile reference books on literary work, Rapaport said.

An October conference held by the University of San Francisco attended by about 100 attorneys featured a daylong presentation by Vander Ark and lawyers from both sides of the case.

"In legal circles ... it's being written about as one of the major intellectual property cases in the 21st century," Rapaport said.

"We are delighted that this matter is finally and favorably resolved and that J.K. Rowling's rights -- and indeed the rights of all authors of creative works -- have been protected," the statement said. "We are also pleased to hear that rather than continue to litigate, RDR have themselves decided to publish a different book prepared with reference to Judge Patterson's decision."

Vander Ark said he never intended to offend Rowling, but rather wanted to give her books "deeper meaning."

The Tales of Beedle the Bard goes on sale today! 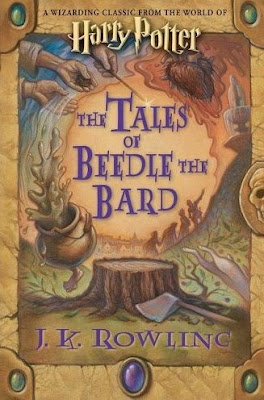